It was a very stormy day, as is frequently the case in the Outer Hebrides in winter. The ferry was tossing alarmingly, the passengers were very scared. Some were lying being sick in the toilets. Others, white faced, were on the cafeteria floor, clinging to the table legs for comfort and support.

Grandpa Donald’s nerves were steady. Despite being over seventy, he was  dapper, and had never lost the sea legs he developed sailing between South America and his native island before the First World War. He made his way with a calculated stagger into the cafeteria full of screaming children and whimpering adults, serenely advancing to the serving area.

“I don’t suppose there’s any chance of a cup of tea?”

He was on his way to South Uist to do a spot of lay preaching, and saw no reason why a force nine gale should come between him and his afternoon cuppa.

Donald died when I was eleven and he was eighty three. Typical of the man, chasing hens up the street was the last thing he did before taking his leave of this world, serene in his faith that he would be re-united with his departed loved ones in the Life to Come.

He used to babysit for me. I have no memory of those occasions, but according to my mother he used to say, every time my parents returned home,

About the stars, and God, and where we all came from, and what life was for, apparently.

I do remember his serenity and good humour, and his kindness. I adored him and was devastated when he died. Donald had always made me feel safe, secure and valued. No one else in my childhood years had done this for me in quite the same way, as I struggled to grow up and get away from my parents. They loved me, but were too damaged in themselves and their unhappy relationship to support me in the ways that I needed.
After Donald died, until I left home, I asked questions only of myself and my books.

Most of us have someone inspiring/challenging we’ll never forget. Who comes to mind for you? It would be interesting to hear. 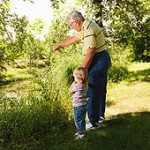 2 responses to “People you never forget….”