A psychological approach to the Tarot, Part Two: the clients’ perspective

This two-part article is an attempt to explore the Tarot. The first installment, ‘Introducing the Tarot: a psychological perspective’ should have given the reader some idea of the depth from which the tarot can be approached, of issues raised by its practice, and of how it can be used as a valuable aid to self-development.

Here, the second part presents feedback from two clients, one female – Anya – and one male – Marc. They were chosen for the way in which they brought together, in their respective accounts, elements of most people’s responses to the tarot creatively and responsibly used.

I was also interested to show how Marc wove his experiences of very different symbol systems ie tarot, astrology and the I Ching as well as more conventional psychotherapy, into his long struggle to arrive at a place of reasonable balance in his life again.

Both names are pseudonyms.

In preparing this article I asked for, and received, very helpful feedback from various clients. I could have used short extracts from all their contributions, but in the end  chose this longer, thoughtful piece from Anya, a female client in her late thirties.

‘……This felt like an extremely powerful experience and I could hardly believe the cards which were turned up. A number of the cards made a direct impact on me as I realised their significance. Some of the other cards were more difficult to connect with at the time, but have since shown their relevance. All in all, it was an extremely affirming experience and offered me the support I so badly needed at the time – gave me something positive to hold onto.

Meaning continues to unfold as time has progressed, and I feel (six months on) that I am shifting into another phase, having embraced each of the cards’ messages in turn.

This experience has underlined for me a sense of being part of something much larger and greater than myself. 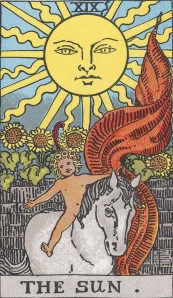 This is awesome! I take faith from this. I found the pictures on the cards most evocative and enjoyed looking around ‘within’ the pictures.

The experience remains with me as an affirmation of my life over the last six months. In many ways I can see that I am at the place of ‘final outcome’ in the reading, certainly having lived through and faced that which I most needed and feared.

Without the reading, I feel that I would have gone through the experience in much the same way. However, holding on to the most positive aspects of the reading offered me vital support and helped me make connection with my inner strength. Furthermore, the element of warning and caution in the reading helped me to be extremely aware of my need to protect myself. This helped sustain me during a most harrowing time. I look forward to my next reading very much!’

Marc‘s response is an extract from written feedback he provided:

‘…..The best way I can think of to approach this, is to answer the question ‘why did I go for astrology and tarot readings at all, especially bearing in mind my previous contemptuous rejection of such things?’

Well, as you know, only a catastrophe got me there! My previous, very rational, world view having collapsed in some considerable disarray, I had a desperate need for some other source of ‘meaning’ in my life – or rather, some other ‘meaningful’ way of understanding myself and what had been happening to me. I don’t think I was too interested in prediction, only in gaining insight.

As you know, I graduated to the tarot reading from several astrology readings and from participation in your astrology classes. Astrology was powerfully attractive for me – after I had crossed the Rubicon of ‘letting go’ of my previous contempt – because within its own terms it is in fact another vast rational system of understanding the universe. What I mean is, even if you think the whole thing is nonsense, it is nevertheless internally consistent, rational nonsense. Hence it rapidly became acceptable to me.

Moving on to the tarot was perhaps my way of travelling further down the road away from rationality, just to see what it was like. By April last year, my worst times were over and I was feeling the green shoots of recovery – much like Norman Lamont! (note: the then UK chancellor of the exchequer). Psychologically, I think I had come to terms with what had happened to me and was beginning to look to the future. I had sent the divorce papers to my estranged wife, but she hadn’t yet returned them, and I was experiencing pangs of doubt about what I really wanted.

Before, with astrology, I was looking for insight; now, with the tarot, I was looking for a method of choosing – but one that was different from what I had done before, one that involved some kind of surrender on my part. That’s not clear. What I mean is – all my therapy with you brought home to me how much energy I have always devoted to creating a picture of reality inside which I then lived. But it turned out that my reality wasn’t reality after all. By relying so heavily on my rational powers, I had created a faulty picture of how things really were.

Tarot seemed appealing because it involved allowing the universe to show you what reality was. If you made an initial commitment to the ritual, surrendered control, the turn of the cards would show you where you stood. I see the I Ching in essentially the same light, and the notion has a ‘thrilling’ aspect to it precisely because I have been so controlled in my life so far.

What was the experience of the reading like? Given that I was dipping my toe in previously uncharted waters, it felt slightly unreal. I couldn’t ‘believe’ in the tarot as easily as I could in the more ‘systematic’ or ‘rational’ astrology whose terms of reference, unlike the tarot, arise from physical bodies we can actually see in the night sky. But it was thrilling.

I would have to say that I hadn’t fully committed myself to the outcome, but I was much more open to what was going to happen than I could ever have been in my life before. It was an experiment.

It was a valuable experience – it helped me to work out my real feelings about my ongoing divorce and about career choices. But it was the talking stimulated by the cards that did that – they were a mechanism for releasing talk and thus feelings.

My experimentation with both the tarot and astrology has led me to an appreciation that many aspects of our lives are ‘fated’ – but that does not obliterate free will or personal responsibility. On the contrary, it seems that everyone has the responsibility of understanding the purpose of his or her individual life – which will depend on his or her inheritance at the start – and has the freedom to choose to make the effort of understanding, then the freedom to do something with the knowledge – or not.

My response to the pictorial images on the cards? You know, for a Presbyterian Scot, I’ve decided I could go in a surprisingly big way for all kinds of pictorial religious symbolism! The allure of forbidden territory? I got the same reaction recently at the temple at Samye Ling (a Tibetan Buddhist monastery in the Scottish Borders). My senses were drenched in gold, red, blue, green and in accompanying sounds and smells! Seriously – perhaps a slightly infantile thrill at ‘surrendering’ my destiny to pretty painted pictures with supposedly magical powers.

I am intrigued with the idea of ‘drawing lots’ either via the tarot or the I Ching, and I think it’s something I’ll probably do again. The idea of choosing by some kind of ‘drawing lots’ ritual is powerfully attractive to me because, if done with full commitment, it could of course represent the placing of trust in something outside myself. But it remains an aspiration, not an accomplishment.

My tarot reading suggested that I needed to consolidate choices I had already made in my heart, and move on to new commitments on the basis of the wisdom I had achieved through experience.

I did in fact go ahead with my divorce, not without further emotional upset, and have in fact consolidated my relationship with my girlfriend. My energy level has improved greatly, as predicted, though not  without ups and downs.

Well, there you are! That’s the best I can do to recall my reactions to the experience…..‘.”

10 responses to “A psychological approach to the Tarot, Part Two: the clients’ perspective”