‘the still, sad music of humanity’….Some thoughts and feelings during an awful week for our world…

Something I have learned – the hard way – is that some of us are more porous to the experiences of others at an intuitive, non-rational level, than others. This hyper-sensitivity is a gift in some contexts: it can ensure an appropriate, compassionate response to one’s fellow beings, thereby enriching one’s own life, as well as being useful to one’s fellows. Having worked all my life in contexts where sensitivity is essential to being an effective teacher and helper, I can personally affirm the value of such a gift. 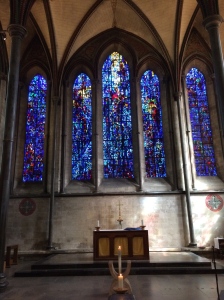 But the gift has a dark shadow. It means difficulty in creating the boundaries that are at times necessary to protect oneself from being invaded by others’ pain, others’ woundedness, others’ unconsciously destructive energies…and the pain of the world…

I have been feeling really low since yesterday when the dreadful news of the Tunisian beach massacre burst on us all, following on other horrors this last week. In this, of course, I am not alone.

I feel as though the dark pain at the core of my own being, old long-accepted pain which most of the time just lies there, like rotting old leaves at the bottom of a deep pond, has risen to meet and join with the world’s pain. Normally I keep those feelings to myself, sharing them only with one or two trusted loved ones. But today, I thought I would write about it, and share a personal experience from a long time ago which  also evoked for me  ‘the still, sad music of humanity’, in poet William Wordsworth’s poignant words.

Twenty five years ago whilst fulfilling our mother’s wish for her seventieth birthday that my brother and I  should take her to visit her older brother’s war grave in Calais, I had a shattering experience of being plugged into the world’s pain which I have never forgotten.

A radio officer aboard HMS “Achieve”, her brother’s ship was sunk in May 1945, off the French coast, shortly before the end of the Second World War. His was the only body from the “Achieve” ever found. Having managed to swim ashore, he died of hypothermia on the beach before anyone could rescue him.

My husband Ian’s diary for Friday 5th May 1990 records ‘Annie a bit nervous about trip to France tomorrow’. Had I known just how fraught it would be, I’d have been hysterical…

The overnight return trip from Glasgow to Calais turned out to be pretty harrowing, owing to our time miscalculation based on erroneous information concerning distances provided by the travel agent, whose cheery “it’s just a hop, skip and a jump from Paris to Calais !” turned out to be two and a half hours longer than he had told us. We finally managed to get to the cemetery, stressed and exhausted from our 6 am start, just as a churlish and unfriendly French attendant was slowly pushing the gates shut for the night.

My choosing to burst into tears to evoke his sympathy rather than punch him, accompanied by my miraculous recall of French, probably saved us from being denied entry on what turned out to be our only opportunity. For the cemetery – bizarrely and unexpectedly – was closed on the following morning, a Sunday, only during the weekend of our visit.

But my mother did find her brother’s grave, and we were all shattered by the experience. I will never forget my brother  and I standing at a respectful distance to give her privacy, keeping an eye on the burly, scowling attendant, as she hung the silver celtic cross she had brought with her over the right hand corner of a small, plain gravestone. Head bowed, she wept quietly to herself. She had loved her brother dearly and deeply.

Fortunately, suspecting we would need privacy, my brother and I had booked us a room each. On retiring to bed after dinner, I began to weep, and simply could not stop until exhaustion eventually brought sleep. It was no ordinary grief: I was aware once again of my personal sorrow becoming a channel  for ‘the still, sad music of humanity’….in Wordsworth’s  poignant phrase: this time, it was for the heartbreak and waste of that terrible war…

It is seventy years since the end of the Second World war, and humanity’s track record on applying restraint to the reptilian part of our brain in order to diminish the impulse to torture, maim and murder those whose values, beliefs, race and gender differ from our own has not appreciably improved as the twenty-first century unfolds. We are unimaginably ingenious, brilliant, when it comes to applying our intelligence for example to the quest  to decode the human genome:  been there, done that! – or to find the Higgs Boson – ditto.

When, oh when, are we going to find a way to stop slaughtering one another?

This entry was posted in 01 - new Posts: January 2015 onwards and tagged "as above so below", hyper-sensitivity, Le Touret Memorial, Prisoners of Conscience window, William Wordsworth. Bookmark the permalink.

15 responses to “‘the still, sad music of humanity’….Some thoughts and feelings during an awful week for our world…”