It’s time I introduced my readers here to that excellent Scots word: stooshie(i).

People tend to create a ‘stooshie’ about something that irritates them, no matter how serious or trivial. You could reasonably argue that the Internet is the most potent stooshie-enabler on the planet.

Anyway, a considerable stooshie erupted in the UK early in November 2020, following the unveiling of a statue, titled… ‘…“A Sculpture for Mary Wollstonecraft”: the piece is “for” not “of” her. It was never meant to be a straightforward depiction of Wollstonecraft herself…’… but… ‘…a piece of abstract art inspired by her life and work…’(ii)

By the artist Maggi Hambling, ‘…it does not depict the women’s rights advocate dressed in a bonnet and skirts, perhaps reading or writing. Instead, it shows a small, silver, naked female figure emerging from an abstract mass….’(ii)

Memorably, The Telegraph called the statue ‘a flimsy, Barbie-like embarrassment’ Check out this link to see the statue….

Any students of mine from 1997/8 reading this column may remember my Mary Shelley obsession of that period: I got very excited about the links between Mary Shelley and Dolly the Sheep (Professor Ian Wilmut, the cloned creature’s creator, was called “Frankenstein in a woolly jumper” by Time Magazine) (iii)). Having patiently endured my going on about this all year, they presented me with a clicky pen with a woolly sheep on it, and matching woolly sheep brooch, at the end of term…

So, not having astro-obsessed about Mary for some while – apart from in my recent article in TMA, that is  –  I was delighted to have an opportunity to do so, albeit indirectly, via the stooshie surrounding her mother, Mary Wollstonecraft, and that statue. In essence, it was roundly criticised and in some quarters raged over. Womankind was generally speaking, not happy. We failed to see why the eminent, feisty, early feminist author of “A Vindication of the Rights of Woman” (1792) should be associated with a tiny female nude on top of a large untidy-looking silver blob.

Having put up sunrise charts for both Mary W and for 10.11.2020, the statue’s a.m. Launch day, I was knocked out by the correspondences.Here, I’ve picked out briefly only the key ones which struck me. No doubt readers will find more.

The prominent presence of the four major asteroid goddesses Pallas, Juno, Vesta and Ceres in both charts is striking – as is Eris, the goddess of strife. The latter forms a turbulent T-square in Mary’s chart, linking with the waxing Uranus Pluto square which was to come to its opposition at the time of the French Revolution. At this point Mary – a vibrant, argumentative, notorious public intellectual and unmarried single parent  – tucked her baby daughter under her arm and set off to check out the Revolution for herself.

At the time of the statue’s Launch, Mary was experiencing an exact Jupiter Return. This involved a close conjunction with Pallas, Jupiter, Pluto and Saturn in the Launch’s chart, squaring Mary’s close Mars/Pallas conjunction, which itself is closely conjunct Launch chart’s Eris and widely conjunct Mars (which turned direct on 14th November 2020). Mary was born with Eris conjunct Pluto at 22/25 degrees of Sagittarius.

Given the very long return cycles of Pluto and Eris, 248 and 556 years respectively, it’s an amazing piece of synchronicity that this Launch statue has waited to appear in the collective for Pluto and Eris once again to form a major aspect – this time, a waning square.

Adding to the radical turbulence and challenge to the status quo indicated in the charts, we also have Uranus at 8 Taurus currently transiting Mary’s 6 Taurus Sun – probably her Sun/Moon conjunction too. This indicates, amongst other things, passionate political rejection of the physical form in which this controversial statue is offered. (Sculpture as an art form very much resonates with Taurus.) Its idealised version of the female nude is precisely the kind of objectification of womankind against which feminism has struggled ever since Mary’s pioneering lead over two centuries ago.

In essence, the stunning combination of those two charts speaks eloquently of Mary’s continuing impact on the world – the rise of the Me Too movement being a recent offshoot – as well as the hugely strong feelings the appearance of this statue has provoked. This will ensure Mary Wollestonecraft and her significance reaches a whole new upcoming Millennial audience, as Mars’ direct motion slowly triggers off the major challenging planetary links between the two charts over this coming winter of general worldwide turbulence.

The 11.6 years Jupiter Return cycle at 11/12, 23/4, 35/6, 47/8, 59/60, 71/2, 83/4 when people are living, continuing as all cycles do – even when we have shuffled off this mortal coil –always opens up new horizons, new learning and teaching opportunities. This November 2020 Jupiter Return of Mary Wollestonecraft’s is especially powerful, given the collective planets and goddess asteroids with which it combines.

To me, this signifies wider significance than a small, albeit provocative event playing out in a London park from 10th November 2020 might suggest.…

Who knew, for example,  that the publication of ‘Frankenstein’ by 20 years old Mary Shelley on New Year’s Day 1818 would prove to be such a prescient warning of the consequences to us of science being allowed to run unchecked by either ethics or compassion for our planet and all its creatures? 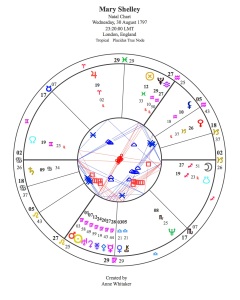 Or that another very young woman, Greta Thunberg, by embarking on 20th August 2018 on a solo school strike in Sweden at the age of 15, would instigate the worldwide Extinction Rebellion movement which seeks to challenge substantial world-wide political inertia and denial in the face of an acute climate crisis? Shelley’s and Thunberg’s horoscopes have stunning links, as I have pointed out in my recent TMA article.

One of the many fascinations of astrology lies in how one can look at the horoscope of a ‘small’ event in the present time, and get a flavour of the future on the larger scale. Albert Einstein pointed out that past, present and future are all part of one continuum, the distinction being part of a ‘stubbornly persistent illusion’(iv)

The Sunrise 10.11.20 chart of the unveiling of a controversial statue to an 18th Century woman whose influence has had a long reach to the present moment, in my opinion offers a strong flavour of increasingly female challenges to the status quo of the passing 200 years Earth era as we move into the new Air era described so vividly by Jupiter and Saturn’s meeting at 0 Aquarius on 21st December 2020.

This Sunrise chart has a close Vesta/Moon conjunction right up on a 7 Virgo MC (conjunct Mary Shelley’s Mars/Sun/Uranus conjunction, incidentally!) trine Uranus in Taurus. The major asteroids are strongly linked in with dynamic planetary patterns already mentioned. There is a very strong emphasis on powerful, mould-breaking female energy in this chart which links so closely with both Wollestonecraft’s chart and her daughter’s.

In the very same week, we heard that Kamala Harris, a woman of Jamaican/Indian origins, has been elected the first ever woman of colour to be Vice-Pesident of the USA. Who knows, when Pluto moves into Aquarius in 2024, the year of the next USA Presidential election, she may end up being elected President.

Isn’t it interesting? That ‘stooshie’ in a London park, its fallout currently ongoing, may prove to be a major early harbinger of a very different future for us all…

(iv) from Einstein’s letter of condolence dated 9.6.1937 to the family of his late friend Michele Besso

(This post is a slightly edited version of my 32nd Not the Astrology Column featured in the January/February 2021 Issue of the UK’s Astrological Journal, edited by Victor Olliver.)

Licensed under Creative Commons – for conditions see About Page