I love cartoons – especially ones which remind us all not to take ourselves too seriously.

In view of my site’s presenting possibly the world’s first Not the Astrology Column (go on – someone out there tell me it isn’t!) I thought the honour of the first cartoon should go to the illuminating of that great subject: 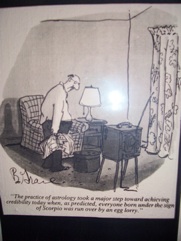 This lugubrious chap clutching a newspaper is staring at his telly which is saying: ”The practice of astrology took a major step toward achieving credibility today when, as predicted, everyone born under the sign of Scorpio was run over by an egg lorry”.

Another of my writing themes is “Just let me get old, ok?” Here is a brilliant cartoon, which certainly made me laugh at myself, and probably made my husband laugh as an alternative to strangling me when in my Psycho moments. (I jest, I jest! He’s a saint of patience and tolerance) 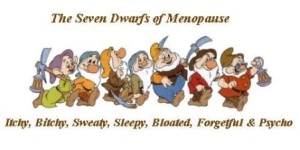 I was feeling expansive. We’d had several lovely sunny days of extended family contact in Devon, some excellent walking by the River Dart, and on Dartmoor. We were having a leisurely coffee at Exeter airport, sitting in the sunshine, waiting for the Glasgow plane. “Mmmm, I feel so relaxed!” I remarked to Ian, my husband, stretching lazily and linking my hands behind my head.

Forty hours later, at 4 am, I was lying in an emergency bed in Glasgow Royal Infirmary, hooked up to an antibiotic drip.

I’m more or less ok now, six days after the wasp assault. The NHS staff were wonderful, despite being so overworked. It’s good to have an arm that doesn’t look like a marrow, and a left hand that doesn’t look like a pound of sausages. However, the whole episode was a reminder that always, always, everywhere, at one level or another, life is just waiting for a chance to ambush you, me or any of us it can get….

Two days after I got out of hospital was my birthday. My sixteen-year old nephew Daniel has inherited the sardonic Whitaker sense of humour. It should serve him well.

Here is a picture of the birthday card he gave me:

Rather apt, don’t you think?

“Life as an ambush in waiting….”

Paul F. Newman is an astrologer, astrology teacher, writer and contributor to many journals including ‘The Mountain Astrologer’ and  ‘The Astrological Journal’, author of“You’re not a person–just a birth chart“ and  “Declination in Astrology The Steps of the Sun“He can be contacted at pneuma@ukonline.co.uk

The above cartoon has just been published in the Astro-Cartoon section of  The Mountain Astrologer magazine (USA) – Issue No. 147, Oct/Nov 2009 and appears here by permission of Paul F. Newman

Fair’s fair! Now it’s time for me to poke fun at men in mid-life (there are several ruder ways of putting this, but I’m still recharging the brain cell from the Festive Season).

Here, therefore, is a cartoon which my husband forwarded to me recently. Normally, I HATE being sent forwards and consign them to the bin (am I alone in this, dear readers?) but this one had me laughing out loud. You will have gathered by now that my sense of humour has a psychopathic edge to it…. 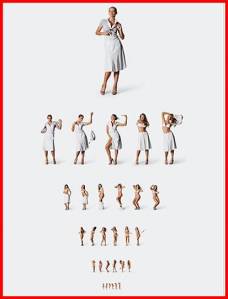 An Unkind Optician's Revenge on the Old Guys....

Every so often I am reminded of why I like my adopted home city of Glasgow, Scotland, UK so much. Recently, as I strolled around wondering who on earth was capable of winning the UK election, I came across the following highly visual statements.The first one is a bit rude so if you are very sensitive, look at it with your eyes shut.

When I had finished falling about laughing, out came my mobile phone. Here are the pics :

If these profound images trigger any ( printable) thoughts you feel inspired to share, please do! (3 May 2011 – JUST noticed the comments box has been off for the whole life of this page……oh well. Feel free now!)