Well, as they say, it has been a week! Mine peaked – or troughed – late on Friday afternoon just after I had posted Part 1 and shared it on my Astrology: Questions and Answers Facebook Page, when Facebook locked me completely out of my whole Facebook account, allegedly ‘to protect the security of our community’. You are my readers: do you think you need protection from me? (answers, on a plain postcard…) 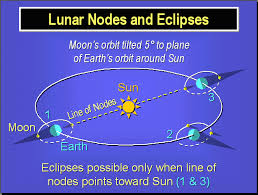 Anyway, cutting a very long and tortuous story short, a saga ensued which involved utterly futile attempts to find an appropriate route through algorithmic obfuscations. In the end, my third email to the source of the previous (algorithmic) ones must have been so pungent (not rude, just pungent) that my account was suddenly restored late last night. I was most relieved, since I had been expecting a long haul – in keeping with two similar episodes in the last year – before what passes for normal service was restored.

Judging from the comments left on Part 1, both on my own blog/astrology Facebook Page and on the Pages of colleagues who kindly shared the post, there has indeed been a lightening of mood with some of us consequent upon this shift; an increase in matters communicative and educational/philosophically reflective in others; and, like me, downright disruption, despite which I too feel a lightening of mood this week. This has modified my feelings of exasperation and of being overwhelmed by matters Gemini/Sagittarius!

This variation in responses and experiences neatly leads into a reminder of some basic principles, also reiterated by Dr Liz Greene in her second webinar on Chiron which I attended yesterday (9th May 2020): when considering the likely impact of any transit, including the Nodes, you need to remember that the transit invokes the basic nature and strength of the original pattern in the natal horoscope, bringing it into relationship with whatever opportunities/challenges the current transit is offering.

My own horoscope will serve as a case in point, but readers can easily apply the same principles to their own horoscopes and current transits. I’ve used a Whole Sign format for the houses.

(I’m assuming readers have a basic familiarity with what the Nodal Axis represents. For those who do not, here is a quick summary.) 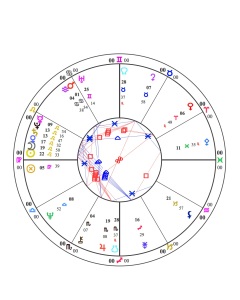 As can be seen, the Nodal Axis is bolted exactly onto the MC/IC axis in the ninth/third houses, very appropriate for a career which has always involved teaching and education in one form or another: all the way from teaching Liberal Studies to bricklayers and gas fitters, through to university entrance qualifications in English to mature students, and thereafter to supervision of social work trainees, and latterly via astrology classes to any and every occupation – from bus driving to psychiatric consultancy.

When you add in that powerful pattern’s being part of a fixed T-Square with the twelfth House Sun/Moon conjunction, also taking in third house Jupiter in Scorpio widely conjunct the IC/South Node, you can see the powerful symbolic role played in the unfolding path of my life’s journey by the Moon’s Nodes. I’ve even written a research study about them!

So – it’s hardly surprising that their shift this week has been very challenging for me. In addition to circumstances already described in Part 1, I’ve been having one of my periodic “What am I supposed to be doing with the rest of my life/ I need some new input!! ” Mercury/Jupiter crises. You’d think at my age I’d have settled that one. No such luck…

The Nodes’ journey through the natal chart

The stronger the links are, then, between natal planets and Angles with the Nodal axis, the more powerfully we will experience the symbolic impact of that axis as it regresses through our horoscopes, taking 18 months to go through each sign and house – pulling the potent twice yearly eclipse seasons with it – taking 18-19 years to return to its natal position. It will bring the core challenges of that natal pattern along to whatever sign, house and planetary aspects it happens to be making in that 18-19 year journey.

As I mentioned in the previous post, the Nodal shift into Gemini/Sagittarius and my tenth/fourth houses has already brought up powerful issues centring round having to balance the demands of domestic and vocational life. With the North Node conjunct the MC strongly pushing me to favour my vocational path, I’ve always been dragged back, usually unwillingly, to the South Node/IC position to deal with domestic matters from which I was unable to escape. It’s taken me decades to arrive at a reasonable balance between those two poles.

As I pointed out some time ago in ‘The Moon’s Nodes in Action’:

‘…Identifying with the South Node position too strongly means leading a life which depends on using the abilities we already have to keep us safe from risk, challenge and therefore growth; whose main priority is comfort; whose mode is a habitual and largely automatic response to life.

Taking up the challenge of the North Node, on the other hand, brings with it a life which feels meaningful and open to new experience; which takes opportunities to develop innate talents and new insights and skills through responding positively to the impetus for change; whose mode is of acceptance of conflict and discomfort as a necessary part of developing as a person.

At the heart of the fullest, most creative expression of the struggle both collectively and individually lies a deep paradox – to move on as human beings we must individuate, follow the path of the North Node, and leave the South Node behind. But we must also make the return journey, to honour that which we ideally do not leave behind at all, but incorporate in our movement towards our own destiny…’ (i)

This personal example serves to illustrate a vital point about the Nodal Axis which applies to us all. We have to honour the challenges of the whole axis as our life path unfolds…

Along with many of us, I’ve found the Nodal Axis’ transit through Cancer/Capricorn, crossing Saturn/Pluto in mid 2019 along the way, to be especially painful in terms of family, loss, and having to restructure life in ways that I would definitely not have chosen. No wonder the Moon’s Nodes, especially when they link with Pluto, have such a fated ‘feel’ to them. This was certainly one of the stand-out conclusions at which I arrived as a result of my own research into the Nodes.

I do not need to remind any of us of what a battering our world community has taken from the winter of 2018/9 as the Nodes have regressed through Cancer/Capricorn, culminating in the rise and spread of the grim pandemic now engulfing the world as the Nodal Axis shifts. Through the corona virus, our planet seems to be telling us in no uncertain terms that we need to radically change the way we live on planet Earth.

It’s fascinating to me as an astrologer (and I’m sure many other astrologers also think the same thing) that the shift of the Nodes into Gemini/Sagittarius has co-incided with several distinctive collective shifts. Here are just a few examples: One, the restlessness and desire to ease lockdown which is becoming more manifest in different countries despite the risk that certainly poses. Humans can only endure severe restriction for so long. We are too restless as a species, and this particular Nodal shift is amplifying that restlessness.

Also noticeable has been that the international search for a vaccine which would gradually bring us greater freedom has been ramping up, producing some promising results eg in the UK where human trials have already begun.

Furthermore at a more negative level for humans, though beneficial for the planet, has been the dawning of a realisation coming into clear focus now: the aviation industry, that supreme ally of human restlessness, is in severe trouble. We may never again be able to take to the air and see the world in the same relatively cheap and carefree way that we’ve come to take for granted in recent decades…

In conclusion– something else which strikes me as apt, and significant, is the North Node’s current presence in airy Gemini, midwifing the Air era beginning at this year’s winter solstice with the Jupiter/Saturn conjunction’s dramatic arrival at 0 degrees of Aquarius. We are going to need the adaptability of Gemini and the optimism and vision of Sagittarius as we step into the great collective adventure of the next two hundred years!

Licensed under Creative Commons – for conditions see About Page

Tagged "as above so below", astrology, astrology questions and answers, horoscope, Liz Greene, Moon's Nodes

After eight years, big changes at Writing from the Twelfth House…

I spent the whole of 2007 wrestling with a dinosaur-like resistance to embracing the new technological world unfolding and wrapping itself around us all whether we liked it or not. Eventually, I decided to go with creative openness and joined it, setting up “Writing from the Twelfth House” in May 2008. I still can’t quite believe how things have opened out from that early start.

I’ve written masses, made a number of good new internet friends and contacts, had heartwarming exchanges with more folk than I can count – to which the comments on my blog posts are testimony – published four e-books, and much, much more…it’s been, and continues to be, a blast.

However, I am now specialising: focusing on my blog Astrology: Questions and Answers, its Facebook Page, a bi-monthly column for the UK’s  Astrological Journal, a USA  bi-monthly column beginning in Dell Horoscope magazine in January 2017, regular reviewing, and articles for quality astrology magazines like the Mountain Astrologer and in 2015, publication on the Astrodienst site.

And – despite my love of variety and challenge, I can’t do everything!

So – do drop in to the extensive trove of articles which you will find on this blog, now an archive where you can still purchase my books, enjoy the Posts I Like and RSS feeds, email me, and make contact  HERE should you wish to book an astrology consultation, or tuition. New material on the same core themes of “Writing from the Twelfth House” will from now on be appearing on its companion Facebook Page.

NOTE: I have quite a number of Followers of this blog who are primarily interested in my astrological writing. If you folks would care to drop by Astrology: Questions and Answers, and sign up for emails/posts from that blog, you will be able to continue reading my astrology posts.

And finally – a heartfelt THANKS to all you good people who have inspired me and livened up my days by reading, commenting and emailing me over those last eight years. Without your support, I would probably have packed the whole thing in ages ago!

The Circle of Life