Tag Archives: Massacre of the Innocents

New Moon on the Winter Solstice

“The rising of the Sun on the Winter Solstice, out of the darkest day of the year, echoes the birth of the light from the dark void on the first day of creation.” 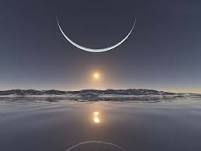 This year’s Solstice thus takes place at the very end of  Moondark, the hidden 2-3 day period each month when the fragile, waning crescent Moon dies into the darkness from which the next New Moon is born.

Moondark in ancient times was a time of retreat, of reflection. People avoided travel at those times since there was no light to guide their footsteps, making the nighttime world even more dangerous than usual.

This seems to be appropriate to the atmosphere world-wide as a particularly grim year comes to an end amid a welter of extremist violence, with especial reference to the ‘massacre of the innocents’ which took place in Peshawar, Pakistan only this week.

Perhaps this Moondark New Moon in the solemn sign of Capricorn symbolises a world-wide invitation to contemplation and retreat as the year turns: to reflect on where we are as a human community, and how we can find ways, somehow, to live more peacefully with one another regardless of race, culture or creed…

In the meantime, we humans in the Northern Hemisphere, beset by darkness and cold, need light and celebration to lift our spirits, no matter how much bleak world affairs or the pains of everyday life hold us down. At last year’s Winter Solstice, I published a wonderful poem by Susan Cooper which depicts the history and expression of this need with vivid beauty. Many of my readers have requested me to publish it again this year.

THE SHORTEST DAY BY SUSAN COOPER

So the shortest day came, and the year died,
And everywhere down the centuries of the snow-white world
Came people singing, dancing,
To drive the dark away.
They lighted candles in the winter trees;
They hung their homes with evergreen;
They burned beseeching fires all night long
To keep the year alive,
And when the new year’s sunshine blazed awake
They shouted, reveling.
Through all the frosty ages you can hear them
Echoing behind us – Listen!!
All the long echoes sing the same delight,
This shortest day,
As promise wakens in the sleeping land:
They carol, fest, give thanks,
And dearly love their friends,
And hope for peace.
And so do we, here, now,
This year and every year.
Welcome Yule!!