This is the last part of a five-part series presenting the conclusions I drew from my 50,000 word original research study of  The Moon’s Nodes in Action. To read the first four posts, scroll down to the end of this one.

4. The Nodes in relation to other chart factors

I started out with certain questions. Do the Nodes say something specific, or do they act as a reinforcer for information which can be derived from other chart factors ? I think I have demonstrated quite clearly that the Nodes and their attendant planetary/Angular links can be used on their own to sketch out a clear picture of  the basic structure of a person’s life path and the archetypal energies which need to be responded to and brought into the journey, for that person to be all they can be.

It seems that strong outer planet links, especially Pluto’s conjunctions or squares to the natal Nodal axis, and strong prevailing major patterns eg Uranus conjunct Pluto opposite Saturn conjunct Chiron linked to the Nodes, bring some people a more challenging life than others. Mary Shelley’s chart is a very good example of this, with Uranus, dispositor of Pluto conjunct MC, conjunct her Sun and square her Nodal axis. 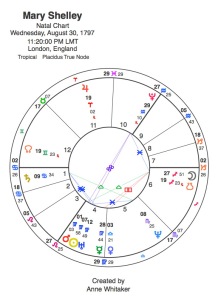 I have distinguished between minor and major Nodal activity in transits and progressions, and demonstrated that the major effect  is what appears to be present when turning points  occur. This would suggest that  in contemplating the unfolding picture of a person’s life, the combination of Nodal activity with the foreground presence of outer planets, especially Pluto, points out that something really special is going on and should be carefully noted.

I also asked whether astrologers are missing something important by not  paying attention to the Nodes, natally and as life unfolds. I think the answer to this is yes, with particular reference to the transitting Nodal cycle and the eclipse seasons which accompany them. The pair of houses highlighted by the transitting Nodal axis and eclipses should be carefully observed, especially if the pre-natal eclipse degrees crop up in the form of a returning eclipse, or a current eclipse is triggering natal patterns linked in to either of the pre-natal eclipses.

I appreciate that we all need to earn our living and there are a multiplicity of interpretive factors available  which would take all day to prepare if they were to be included in every reading. We have to be selective.

But having done the research for this thesis, I think that, in preparing a reading, if the clustering effect I have been discussing is in evidence, it is important to pay particular attention to that person’s natal Nodal pattern and the current Nodal/eclipse picture. The client is then likely to be bringing matters of a life-changing nature to us for discussion, which offers us roles both as observers and midwives; human agents in the here-and-now  of those mysterious ‘watchers by the threshold’ whose  numinous presence in our lives is symbolically represented by the Moon’s Nodes in  Action.

Thanks to the many readers of this series for your interesting emails in response to those conclusions regarding the significance of the Nodes. Any other responses continue to be welcome. I have archived the series (see Categories on Home Page) for easy future reference. I will also at some point be publishing, over several installments – may even give it its own blog – my long case study on Mary Shelley’s authorship of “Frankenstein”, bringing in charts of all the significant figures influencing her writing of what has become a modern myth at the very young age of 19 – and her first Nodal Return.

Previous Posts in this series:

The Moon’s Nodes in Action: Part One

Major and minor chords: The Moon’s Nodes in Action: Part 2

This ground is holy: The Moon’s Nodes in Action: Part 3

“In my end is my beginning….” The Moon’s Nodes in Action: Part 4