There must be many in church congregations whose paths have followed the same trajectory as mine: Christianity is the starting point, at a stage in life where choice is not an option. Rebellion soon rears its head. (One of my methods of silent teenage protest was to go to church with hair rollers secretly in place under the detested Sunday hat.)

Then unfolds the long, possibly very varied route culminating eventually in a return to the ground where the journey began. In the summer of 2005 my husband and I began attending our local Episcopal church – now it feels very much like home territory.

For this entirely unexpected turn of events, I hold the Dalai Lama at least partly responsible!

In the process of extensively reading and benefiting from Buddhist wisdom, via inspirational Buddhist teachers including Jack Kornfield, Joseph Goldstein and Pema Chodron, I came across a comment from His Holiness to the effect that if one could find a corner in one’s own tradition, why adopt anyone else’s? After reflecting on this observation for a long while, I concluded that the Dalai Lama was right.

Thus, after a lengthy and complex spiritual quest, I found a spiritual home – open enough to accommodate my belief that all Gods are One – a mere fifteen minutes’ walk from our house.

Since this return to Christian roots, I have been reflecting on whether, over the years, there has been a particular setting to which my soul usually returned to find peace and sustenance. In the absence of Church, what provided a context for the longing for the Sacred? For me it was the sea. 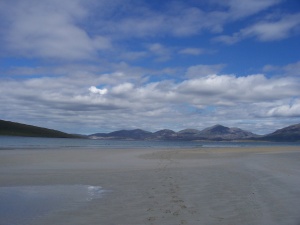 Sea as Church - the Outer Hebrides

I was born by the sea. The stripped-down Presbyterianism of my native Hebridean island certainly spoke eloquently to many, but did not speak to my Romantic temperament: it was a form of worship too spare and verbal for a soul whose longing for the Divine needs the engagement of all the senses.

Since attending the Episcopal church, I have often been struck by the evocatory similarities which exist between experiences of Church and of the sea.

The most obvious is the stimulation of the five senses, opening one up to a feeling of union. The serene grace of the ‘liturgical dance’ within a beautiful, atmospheric building saturated with prayer and flooded (on a good day!) with colour from vibrant stained glass windows, can be quite overwhelming. Then there is the heady scent of incense, the rich sound of choir and organ, the physicality and friendship of touching others familiar and unknown through the sharing of the peace and the sharing of the Eucharist.

The remote beaches of the Hebrides are also perfect for communing. In some places no mark of human hand can be seen anywhere. You could be in any epoch.

The endless ebb and flow which soothes your spirit is millions of years old. With the cries of wild birds, and the sound of the wind ( no shortage of that !) the sea weaves music which carries you beyond time. The rich smell of ozone, salt and bladder-wrack is overlaid with a delicate scent of wild flowers. Sea splashes leave salt tastes on your skin. Sunlight on the sea’s surface creates diamond sparks. God is right here.

Natural beauty calls to us, confirming that the Holy Spirit which we sense in nature includes us all. Sand, sea, sun and solitude evoke a sense of our infinite smallness in relation to the vastness before us. Yet there could be no sea without each drop of water, no beach without each grain of sand.

Church on the face of it is very different, being a contained space. But it is a space charged up with collective worship, where the cadences of liturgy and participatory ritual also evoke a feeling of God’s vast presence in relation to our precious smallness.

The mind-calming, meditative facets of sea, and centuries-old church ritual, can lull us into peace, calming the heart and uplifting the spirit. Both sea and Church in their differing ways can restore a sense of the balance and interweaving of matter and spirit – “spirit is a lighter form of matter, matter is a denser form of spirit” –  and provide a reminder that the small, limited, mundane world which we inhabit is set to the compass of Eternity.

Posted in Experiences of Oneness / the Source (article archive)